You might have heard numbers in climate change news describing the total amount of carbon dioxide, a potent greenhouse gas, that is released across the entire earth within a year. So how do scientists calculate this annual number? Some parts of this calculation are relatively straightforward, like adding up the amount of carbon dioxide released from burning oil or gas around the world. Others are more complex and some even require diving into the soil to look closely at the lives of tiny organisms like bacteria and fungi.

So, how do these tiny organisms, referred to collectively as microbes, influence carbon emissions? Just as humans breathe, many microbes take in oxygen and release carbon dioxide as they build up energy that they can use to make things like proteins. So, in a way, the soil breathes! Also like humans, microbes must have a source of food to make energy.

Because soil microbes release carbon dioxide when they breathe, it is important to figure out what makes the soil breathe faster or slower to help predict global carbon dioxide release. Kent Connell, a graduate student at Kansas State University, is currently asking research questions related to this problem.

To understand Kent’s research, picture this scenario: You’ve had a long day of school or work and arrive home hungry and tired. You feel like you just need to eat a quick snack before you even have the energy to prepare a proper meal! This is similar to what happens in the soil around plant roots. Plants leak sugar from their roots that microbes can use for some quick, easy energy that then allows them to break down bigger, tougher food in the soil. It turns out that different plants release different sugars, and in response, different kinds of microbes gather around the roots of different plants (like in the picture below).

Kent wants to know what happens if you take a plant from its “home” soil with its own group of microbes and plant it in an “away” soil (the soil of another plant with a different set of associated microbes). So, if you look at the picture of the corn and the grass, this would be like planting corn in soil that previously had grass. The soil still has those blue groups of microbes living in it but now it is supporting corn rather than grass and is therefore receiving corn sugar rather than grass sugar.

Kent is currently trying to identify which soil microbes might be responsible for these changes in soil breathing rates and hopefully, after digging in the dirt a little more, his results will provide additional pieces of information to make annual calculations of carbon dioxide release more accurate. 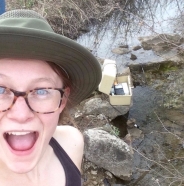 This post was written by Sophie Higgs. Sophie has spent most of her graduate career at KSU splashing around in prairie streams attempting to answer questions about how stream life uses nutrients.