This post is the first of our new series covering Science on Tap. This monthly event, a part of Sunset Zoo’s Behind the Science initiative, is a gathering at the Tallgrass Taphouse during which a featured scientist shares their research and engages with the audience in a lively conversation about the topic. Hopefully you are able to grab a beer and join in on the conversation; if not, we’ll be here to provide a summary of the research that was shared!

Have you ever been in a room full of people and wondered whether another person in the room has the same birthday as you? The chances that one other person will share your birthday in a situation such as this is a question of probability, termed the birthday paradox. This statistics problem has been studied in detail, and the results are quite surprising. In a room containing 65 people, there are a total of 2,080 number of unique birthday pairs; quite a big number of interactions! And though it seems like 65 is not that many people, there is a 99.7% chance that two people share the same birthday in a group this big. The problem is finding a significant pair, two people with the same birthday, in a pool of insignificant ones.

Ryan Hansen, an assistant professor in K-State’s chemical engineering department, and Tom Platt, an assistant professor in the Division of Biology used this analogy at Science on Tap last Wednesday to introduce their research question, only they are more concerned with microbes than with birthdays. So, now instead of a room of 65 individual people, imagine millions or trillions of microorganisms living together in the same place, some of which interact with each other and some that don’t. Can you imagine how much more complicated pinpointing a significant interaction would be? That number of organisms interact all the time in many places; one of those ‘places’ is you!

At any given time, you have more than 65 trillion microbes living in your body! All these microbes perform tasks that are necessary for you to be healthy. They prevent invasion by harmful microbes, they help you digest food, they protect your skin, and can help decrease inflammation and blood sugar. The collection of all these microbes, which includes bacteria, yeast, fungi, and viruses, is called the microbiome; and just like there is a human microbiome, there are microbiomes in different places in the environment.

One microbiome that is of interest, because of its complexity and effects on agriculture, is the soil microbiome. Drs. Hansen and Platt are collaborating to study the diversity of soil microbes and to understand significant interactions among the bacteria that live in the soil, utilizing micro- and nanotechnologies. Together, they have developed a piece of technology called a microwell array platformthat lets them look at thousands of microbial interactions at the same time and allows them to identify interactions of interest. Imagine a thin piece of glass, no bigger than your thumbnail; that’s how big one of these platforms is! Each one of these pieces contains thousands of tiny wells into which researchers can inject various combinations of microbes.

Now, imagine you use this tiny platform to screen 500 microbial pairs and you find two microbes that have an interesting interaction. What would you do? The novelty of this platform is that it allows a researcher to extract bacteria from specific wells. With this new technology, you could select the well of interest, shine light specifically on the well, and extract the bacteria from it. After extraction, researchers could grow the bacteria, use it to perform biological tests, or sequence the bacteria’s genes to understand the species that are living in the soil and how they affect each other. Although this new technology is still in the development phase, once it has been finalized it will allow researchers to study not only soil microbiomes, but human or water microbiomes, which ultimately will further our understanding of microbial diversity and interactions, helping unlock the invisible world of microbes. 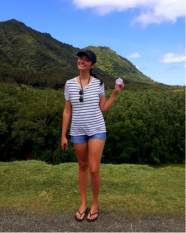 This post was written by Priscila Guzman, a second-year biology graduate student. Priscila uses Agrobacteria, a bacterium that causes tumors on plants, to study the interactions between cheaters and cooperators by making them mate or fight.